The National Crime Victimization Survey and the FBI Hate Crime Statistics Program (see below) use the definition established by the Hate Crime Statistics Act (28 U.S.C. § 534). The Act defines hate crimes as “crimes that manifest evidence of prejudice based on race, gender or gender identity, religion, disability, sexual orientation, or ethnicity.”

As shown in the figure below, hate crimes in the NCVS include nonfatal crimes recorded by the NCVS that are 1) confirmed by police as bias-motivated, according to the victim's report, 2) perceived by victims to be bias-motivated because the offender(s) used hate language, or 3) perceived by victims to be bias-motivated because the offender(s) left behind hate symbols. Victims must report at least one of these three types of evidence for classification as a hate crime in the NCVS. Bias motivation classifications in the NCVS rely on victim reports and include at least one of the following categories of bias against the victim: race, ethnic background or national origin, religion, disability, gender, sexual orientation, association with people who have certain characteristics or religious beliefs, and perception of victim's characteristics or religious beliefs. NCVS hate crime estimates may reflect incidents involving multiple bias motivations on the part of the offender(s). 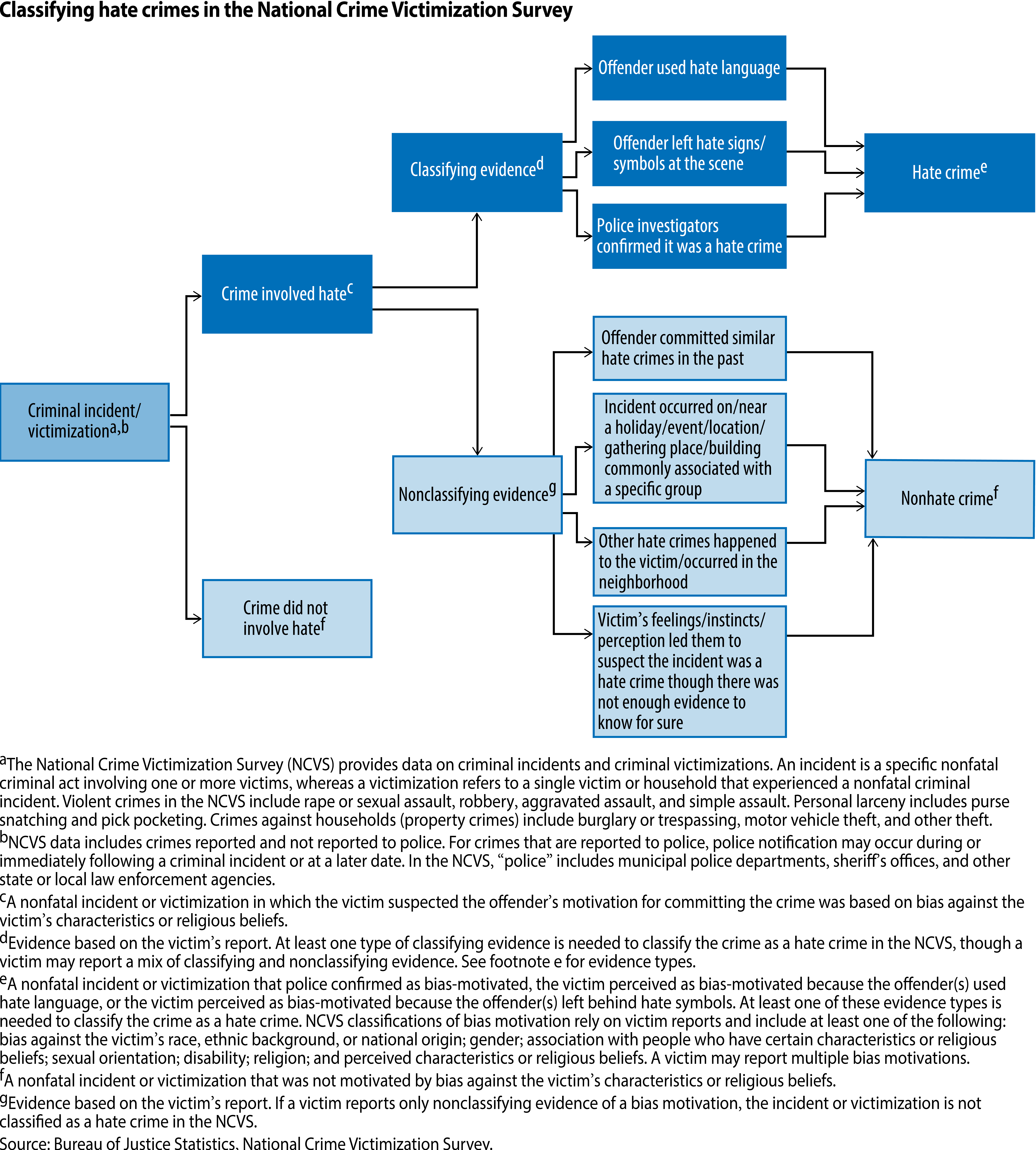 BJS analyzes data on criminal prosecutions of hate crime through the FJSP, which includes data from the Executive Office for U.S. Attorneys’ Legal Information Office Network System and the Administrative Office of the U.S. Courts.

The U.S. Department of Justice’s Civil Rights Division defines hate crimes as “acts of violence or threats of violence motivated by bias based on statutorily-protected characteristics. This includes acts of physical harm and specific criminal threats motivated by animus based on race, color, national origin, religion, gender, sexual orientation, gender identity, or disability.” There are four federal statutes specifically for hate crimes, as well as a general conspiracy statute that is used in hate crimes prosecutions.

18 U.S.C. § 245. Federally protected activities—Prohibits intentional interference, by force or threat of force, with certain specified constitutional rights, where the interference is motivated by race, color, religion, or national origin. Activities protected under this law include (1) enrollment in a public school or college, (2) participation in programs administered or financed by any state, (3) federal and state employment and jury service, (4) interstate travel by common carrier, and (5) use of restaurants, lodging, gas stations, public entertainment facilities, and other establishments serving the public.

18 U.S.C. § 249. The Matthew Shepard and James Byrd, Jr., Hate Crimes Prevention Act of 2009—Prohibits willfully causing bodily injury, or attempting to cause bodily injury with a dangerous weapon, when the crime was committed because of (1) the actual or perceived race, color, religion, or national origin of any person, (2) the actual or perceived religion, national origin, gender, sexual orientation, gender identity, or disability of any person and the crime affected interstate or foreign commerce, or (3) any of these characteristics (actual or perceived) if the crime occurred within federal special maritime and territorial jurisdiction.

42 U.S.C. § 3631. Criminal interference with right to fair housing—Prohibits forcible interference with any person in selling, purchasing, renting, financing, occupying, or contracting for any dwelling due to that person’s race, color, religion, gender, national origin, disability, or family status.

18 U.S.C. § 241. Conspiracy against rights—Prohibits conspiracies to injure any person who is exercising rights or privileges protected by the Constitution or laws of the United States. The statute has been applied to a variety of federal rights, including the right not to be deprived of life without due process of the law, the right to vote in a federal election, and the right to occupy housing free of racially motivated violence.

Through the HCSP, the FBI Uniform Crime Reporting (UCR) Program collects hate crime data on crimes that were motivated by an offender’s bias against a race, religion, disability, sexual orientation, ethnicity, gender, or gender identity. The categories of bias have changed over time, and now include 6 categories of bias motivation and 34 specific types of bias. Determining if an offender was motivated by bias can be difficult, and the FBI instructs reporting agencies to report bias “only if investigation reveals sufficient objective facts to lead a reasonable and prudent person to conclude that the offender’s actions were motivated, in whole or in part, by bias."

As of January 1, 2021, the FBI National Incident-Based Reporting System (NIBRS) is the national standard by which law enforcement agencies submit crime data to the FBI. NIBRS agencies indicate whether an offense was motivated by an offender’s bias against the victim for each reported offense. For more information, refer to the FBI’s Hate Crime Statistics program page.