The National Crime Statistics Exchange (NCS-X) is an initiative to develop a statistical system of incident-based data, on crimes reported to law enforcement, to generate nationally representative estimates of the volume and characteristics of crimes. NCS-X data will capture the attributes and circumstances of criminal incidents at the national level, allowing for more detailed and transparent descriptions of victimization and offending that will improve the nation’s ability to monitor, respond to, and prevent crime.

NCS-X was implemented in two phases, (1) obtaining incident-based crime data by expanding coverage of the FBI’s National Incident-Based Reporting System (NIBRS), and (2) developing statistical estimation procedures that provide a national picture of the details and context of crime.

As of January 1, 2021, the FBI Uniform Crime Reporting (UCR) Program retired the Summary Reporting System (SRS), the system for collecting reported crime data from law enforcement that had been in place for more than 90 years. NIBRS is now the national standard by which law enforcement agencies submit crime data to the FBI. 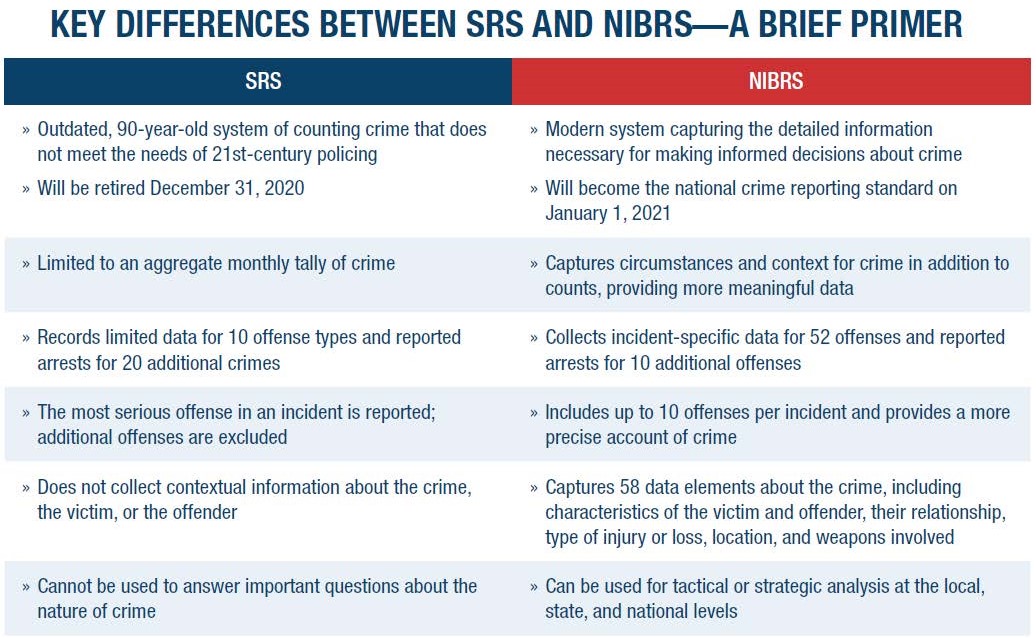 Until January 1, 2021, the United States’ primary measure of crime known to law enforcement was monthly counts of ten offense categories—murder and nonnegligent manslaughter, rape, robbery, aggravated assault, burglary, larceny-theft, motor vehicle theft, arson, human trafficking-involuntary servitude, and human trafficking-commercial sex acts—based on the most serious offense reported for each crime incident. NIBRS was implemented in the late 1980s to improve the overall quality of crime data collected by law enforcement by capturing details on each single crime incident—and on separate offenses within the same incident—including information on victims, known offenders, relationship between victims and offenders, arrestees, and property, weapons, and/or drugs involved in crimes.

When NCS-X was designed in 2010, only about 25% of the nation’s roughly 18,000 law enforcement agencies contributed data to NIBRS. While the data collected through NIBRS was ideal for the NCS-X, agency participation rates did not meet minimum requirements for quantifying crime at the national-level. BJS determined it could produce national estimates of NIBRS data by enrolling a scientifically selected sample of 400 law enforcement agencies to submit data in addition to the agencies already participating in NIBRS.

In 2013, BJS and the FBI partnered on NCS-X and began working to expand NIBRS coverage through funding, training, and technical assistance to law enforcement agencies. The partnership leveraged the FBI’s existing NIBRS program infrastructure, allowing the two agencies to, (1) promote NIBRS data collection among the state Uniform Crime Reporting (UCR) programs, and (2) recruit the 400 NCS-X law enforcement agencies and support their transition to NIBRS.

NCS-X funding and assistance were provided to two types of state entities--state UCR Programs and State Administering Agencies (SAA). In order to expand NIBRS reporting nationally, the NCS-X worked with state UCR Programs to ensure they were “NIBRS certified,” meaning the program demonstrated it was capable of collecting and processing NIBRS-compliant data from state and local law enforcement agencies and could transmit those data to the FBI. State-level NCS-X funding served two general purposes, to (1) help state UCR Programs upgrade or procure NIBRS-compliant data repositories and other software, hardware, or equipment necessary for improved data automation and transmission, and (2) expand incident-based reporting within the state by partnering with SAAs to administer subawards to state and local agencies selected into the NCS-X sample of 400.

Members of the NCS-X Technical Assistance and Implementation Team (NCS-X Team) worked directly with NCS-X selected agencies to identify gaps in their ability to report incident-based data. As part of recruitment activities, the NCS-X Team conducted Readiness Assessments to identify transition needs and associated costs to successfully collect and report compliant incident-based data. Funding was provided to improve data automation and reporting, with most eligible agencies receiving funds to obtain a NIBRS-compliant records management system (RMS) or other software, hardware, or equipment necessary to report to NIBRS. The NCS-X Team regularly met with award recipients to offer project guidance and technical assistance.

The transition to NIBRS means that crime statistics generated by the FBI’s UCR Program will be based solely on data submitted to NIBRS. As of February 2022, 11,525 law enforcement agencies were reporting to NIBRS, comprising 61.2 percent of all crime-reporting law enforcement agencies covering 64.5 percent of the U.S. population. To calculate a national crime rate based on NIBRS data, BJS, in partnership with the FBI and with statistical and technical support from RTI International, established a new set of statistical procedures to estimate crime, based on data provided by NIBRS-contributing agencies.

The NIBRS Estimation Project page contains additional information about the collaboration between BJS and the FBI and links to resources about the project.

More than 18,000 law enforcement agencies collect and report crime data to the Uniform Crime Reporting (UCR) program, either through the Summary Reporting System (SRS) or NIBRS. The NCS-X sample was drawn from law enforcement agencies that had reported crime data to the SRS in 2011. SRS data contributors were stratified into 11 strata or categories by agency type and total number of sworn personnel.

The NCS-X Team also produced resource and other materials for state UCR Programs and for state and local law enforcement agencies, to support the expansion of NIBRS reporting.

More Information on NCS-X and NIBRS