The NCVS was originally designed to provide national-level estimates of criminal victimization. Since its inception in 1973, BJS has recognized the need for victimization data at the state and/or local levels. The three major reviews of the NCVS program—Penick and Owens, 1976; Biderman et al., 1986; and Groves and Cork, 2008—point to the demand from local criminal justice administrators for empirical information and data on crime that they can use to inform policy and practice.

Interest in subnational victimization data is met with practical limitations in producing these data. The NCVS is a complex household survey, which involves about 240,000 interviews on criminal victimization, involving 160,000 unique persons in about 95,000 households each year. Administration of the NCVS to produce reliable national-level estimates is costly and can potentially involve the risk of disclosing sensitive information. These challenges are amplified in producing estimates for lower levels of geography. Thus, options for producing subnational victimization data through the NCVS require careful consideration.

Accordingly, BJS crafted plans to produce subnational crime data through multiple strategies and responses and supported research that demonstrated the NCVS can be enhanced to produce several types of subnational estimates. Since 2012, BJS worked with subject matter experts to develop various approaches for producing subnational victimization estimates, including:

These approaches are illustrated in the figure below, and the relative benefits and limitations are summarized in Approaches to Subnational Estimation with the NCVS. 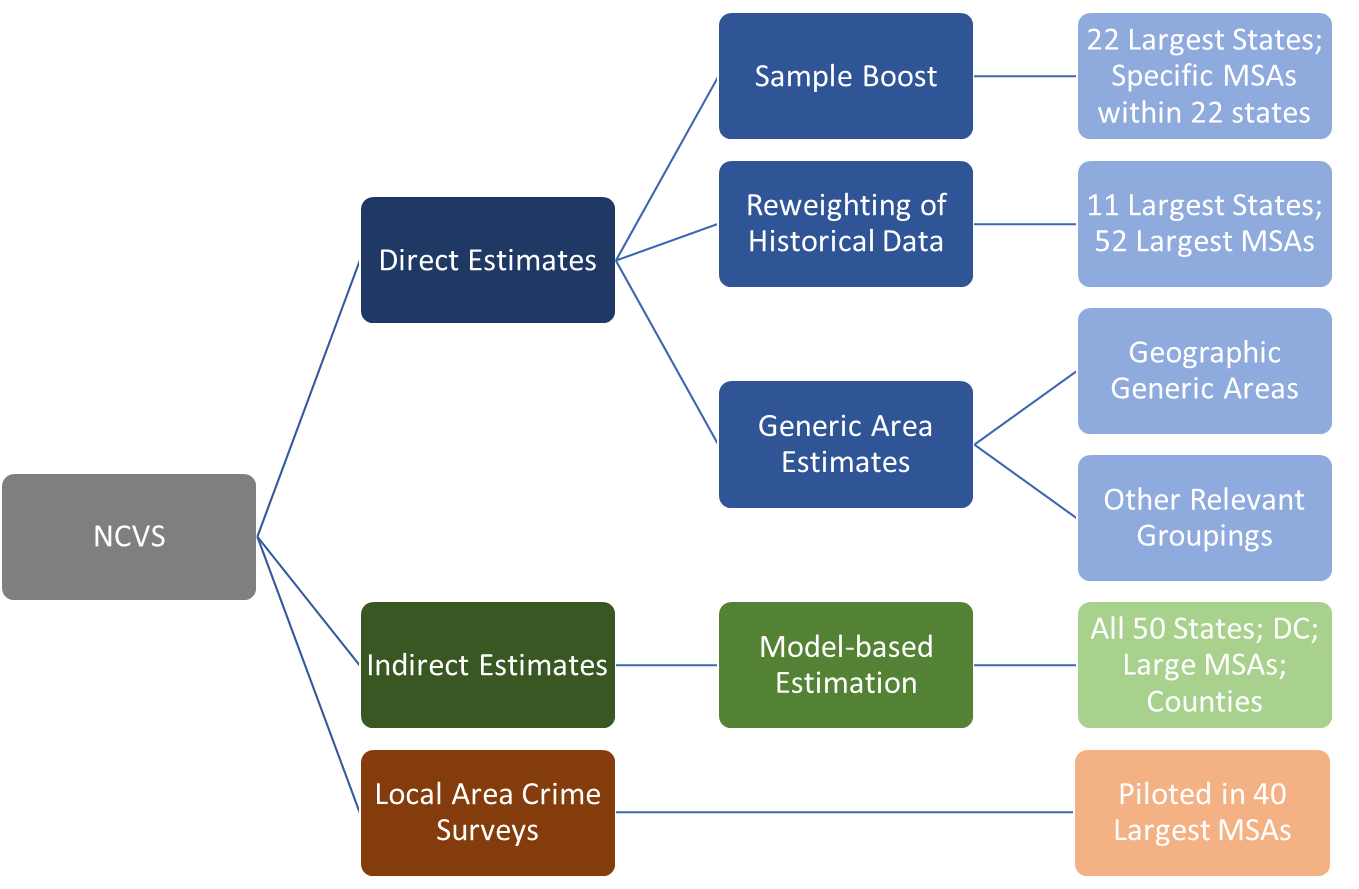 Approaches to Subnational Estimation with the NCVS

Beginning in 2016, BJS increased the size of the NCVS core sample in the 22 most populous states, based on preliminary findings from a boost pilot test. Concurrent with the sample boost, BJS also adjusted the allocation of the sample as needed within these 22 states to enhance the representativeness of the NCVS sample relative to the population within each of these states. Together, these changes were designed to enable production of state-level estimates of violent victimization for the 22 states and specific metropolitan areas within those states with three years of aggregated data. BJS decided to focus on the 22 most populous states based on the estimated sample size that would be needed to produce representative estimates with sufficient precision, while balancing the increased costs associated with a larger and more geographically diverse sample. The 22 states selected for the sample boost accounted for 79% of the total U.S. population and approximately 80% of violent crime reported in the FBI's Part 1 Uniform Crime Reports.

BJS is working to carefully examine and validate the initial three-year direct NCVS estimates and plans to produce a report on these data. See forthcoming publications for more information.

To mitigate disclosure concerns, state identifiers are not currently included on NCVS public-use files. Independent state-level analyses must be conducted using the restricted-use data files available at the U.S. Census Bureau headquarters or at a Census Research Data Center.

To address the needs of data users and stakeholders for more localized victimization data and to allow for the evaluation of trends in victimization over time within subnational areas prior to the sample redesign in 2016, BJS explored the feasibility of producing subnational estimates for years prior to 2016 using reweighting methods. These methods involve aggregating data from the national sample over multiple years and recalibrating the distribution of NCVS respondents within a particular subnational area (i.e., state or MSA) for as many known demographic and socioeconomic characteristics as possible. Using this method, victimization estimates have been generated for the 11 largest states and 52 Metropolitan Statistical Areas (MSAs) from 2008-2015.

Additional information about the reweighting methodology and victimization estimates for MSAs and states are available in the BJS third-party report, Estimating Crime Victimization in Large States and MSAs Through Reweighting: Evaluation and Methodology.

State identifiers are currently not included on NCVS public-use files so state-level analyses must be conducted using the restricted-use data files available at the U.S. Census Bureau or at a Census Research Data Center.

When direct estimation techniques are not feasible to employ due to insufficient sample sizes, the indirect or model-based estimation approach can be used to generate victimization estimates for subnational areas. The model-based approach leverages auxiliary data or data from different time periods to effectively increase the sample size by linking related small areas. Auxiliary data from the American Community Survey, the FBI's Uniform Crime Reporting Program, and the decennial census have been used to augment the NCVS sample to generate model-based estimates of criminal victimization for all 50 states, DC, large metropolitan areas, and counties.

The subnational geographic identifiers needed to produce the model-based estimates are not available on NCVS public-use files so analyses must be conducted using the restricted-use data files available at the U.S. Census Bureau or a Census Research Data Center.

Below is a list of reports using or describing the application of the model-based, or small area estimation, methodology for NCVS data:

As part of the subnational program, BJS evaluated the use of generic area typologies based on various geographic, social, economic, or demographic characteristics as a way to provide more localized information about criminal victimization. These generic areas are intended to represent all places that are similar to each other based on a particular set of characteristics (e.g., urban areas in the northeast with a population size of 1 million or more persons). The use of generic areas allows data users to identify the typology which best aligns with their primary area of interest and make relative comparisons against similar and different types of places from that perspective.

Below is a list of reports using or describing the application of the generic area approach for NCVS data:

Another avenue for producing subnational estimates of victimization explored by BJS as part of the subnational estimation program is through the administration of the Local Area Crime Survey (LACS). Using mail data collection procedures and a truncated instrument based on the NCVS, these methods were constructed to be relatively inexpensive so that they could be administered by states, MSAs, cities, or police jurisdictions. Victimization estimates produced from the LACS are designed to correlate with those from the core NCVS and to support estimates of change over time within an area as well as comparisons across areas. A field test evaluating the feasibility of the LACS was administered in the 40 largest core-based statistical areas (CBSAs) in 2015 and 2016.

The LACS survey kit includes survey questionnaires, a template for a request for proposals from survey vendors, and sample supporting materials from the Field Test. This document offers general guidance on how to use those materials to conduct the survey and analyze the results.

Below is a list of reports related to the LACS instrument and methodology:

Public-use data from the National Crime Victimization Survey (NCVS) are available from the National Archive of Criminal Justice Data (NACJD) within the Inter-University Consortium for Political and Social Research (ICPSR) in a variety of forms designed to facilitate their accessibility and analytical use. These include the full data collection, which is stored as a hierarchically structured data file, and a variety of smaller extract files.

Access to the NCVS, geocoded restricted-use data files are made available through the Census Bureau’s Federal Statistical Research Data Centers (RDC). Before researchers can access NCVS microdata, a research proposal must be submitted and approved by BJS and the Census Bureau. For more information on the proposal process, visit Center for Economic Studies (CES).

What can subnational data be used for?

Subnational victimization estimates have great potential value for federal and nonfederal data users, stakeholders, and researchers. Federal stakeholders who currently allocate funding or resources for crime victims and crime prevention based on official police crime estimates could use the subnational victimization estimates to understand how the allocation of funding might change if estimates of unreported crime are taken into account. Policymakers could use subnational estimates to examine state and local variation in crimes reported and not reported to the police and make comparisons across states and localities. Law enforcement officials could use the findings to begin to understand differences in rates of crime and reporting to police within and across jurisdictions. The data could also be used in conjunction with official police statistics to better to understand the correlation between the NCVS and official police reports of crime. In addition to subnational victimization estimates, perceptions of police and community-related safety measures are also of potential interest to local areas in their efforts to combat and respond to crime.

Why have different methods been used to produce estimates for the same areas?

Each of the potential subnational estimation methodologies have their own set of benefits and limitations. Prior to examining the different approaches, it was unknown how these methods would perform within certain area types. For example, the reweighting methodology is relatively straightforward to implement but the number of subnational areas that would support estimates was limited due to insufficient sample sizes. In contrast, model-based estimates using existing NCVS data and external sources can be produced for a much greater number of subnational geographies, but implementation of these methods is complicated and difficult to replicate. Although the direct sample boost method may be the most desirable option, it is also the most expensive to implement. Further, the ability to evaluate trends over time is limited by the national-level design used prior to 2016 and the need to aggregate multiple years of data. Data users are encouraged to examine and understand the methodology used to produce the different types of estimates and the inherent limitations of each approach.

Which subnational estimates can be trusted?

Each of the estimation approaches pursued by BJS is based on rigorous statistical methodology, but, as with all survey-based approaches, the resulting estimates are subject to different sources of error which introduces uncertainty as reflected in the variance of the estimate. As such, the various subnational estimates should be interpreted as the midpoint of a confidence interval that is likely to contain the true value. This interval may be quite large for some estimates, and can vary considerably across the different methodologies and area types due to the degree to which a given estimate is subject to the various sources of error. Each report produced using a subnational methodology details considerations that readers should take into account in evaluating the data.

Can I use the subnational estimates to rank areas across the nation?

Crime estimates, even at the national level, are subject to different types of potential error. The incidence of crime at local levels is correlated with different factors that are difficult to capture within a single survey. Subnational estimates, like national NCVS estimates, are designed to provide an indicator of crime victimization outside of indicators generated by police and to provide data on characteristics of victims and crimes for population and subgroups. Therefore, users are cautioned against ranking areas solely based on these data without considering the fuller context of local conditions and characteristics.

Which methodology is appropriate for my analysis?

When choosing a method for a particular analysis or reporting a subnational estimate from a published BJS analysis, it is important to understand the benefits and limitations of each approach. Comparisons of estimates produced from the different methodologies, even for the same area, are discouraged as it is not possible to know how much of the difference is due to different levels of bias across the estimates. Even for estimates produced using the same methodology, relative comparisons rather than absolute comparisons are encouraged as point estimates that may appear different may not actually be statistically different when the uncertainty, or standard error, of the estimates is considered. Also, it is important to note that different methods require different file types in order to be implemented. With the exception of a limited number of generic area typologies and direct estimation with reweighted data for the 52 largest MSAs (public-use file forthcoming), all other methods described require access to the restricted-use data files only available at the Census Bureau or through a Census Research Data Center.