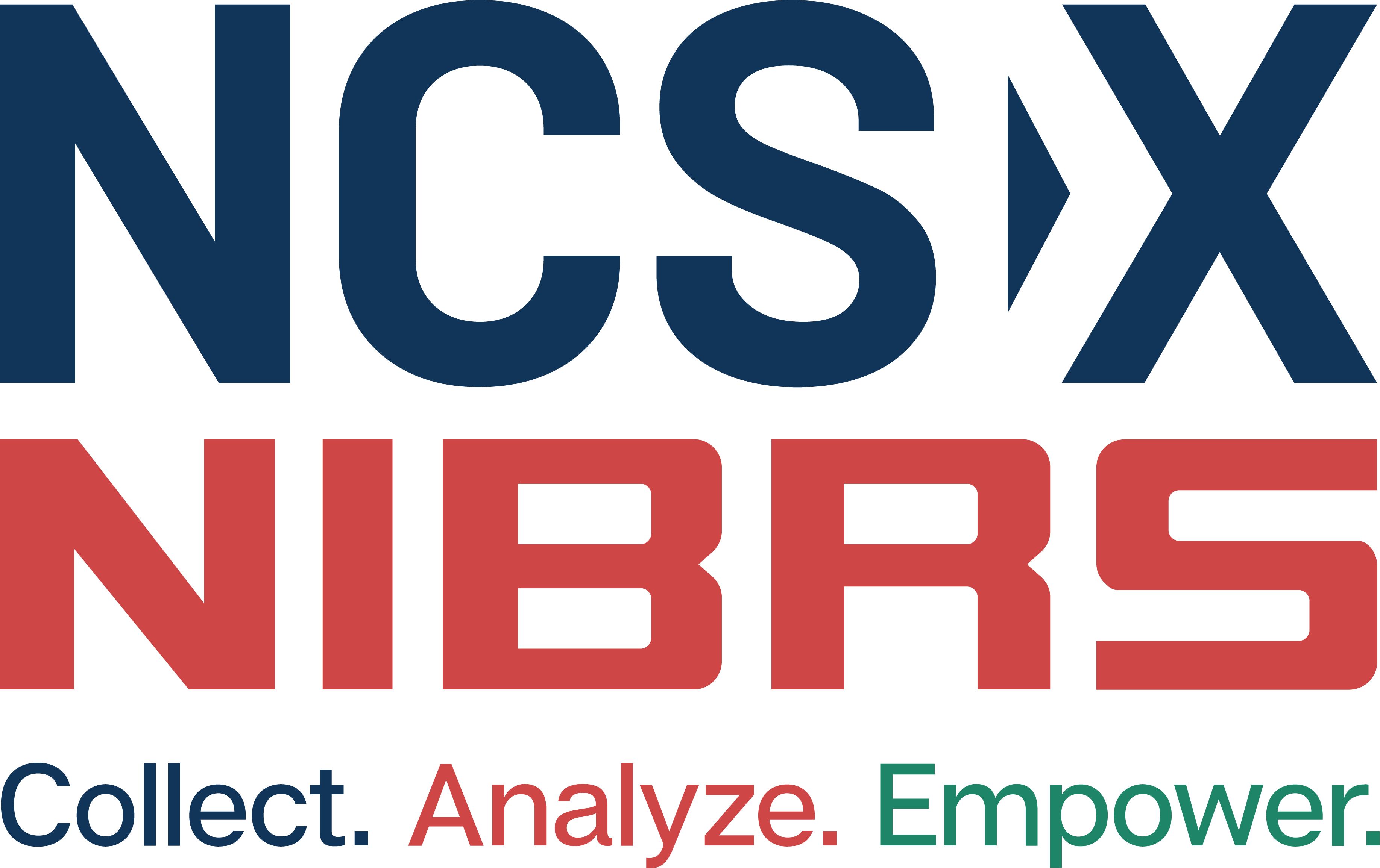 The National Incident-Based Reporting System (NIBRS) is an annual data collection system that compiles information on criminal incidents and arrests reported by participating law enforcement agencies. NIBRS is collected and maintained by the Federal Bureau of Investigation (FBI). In 2015, NIBRS captured detailed incident characteristics for 49 Group A offenses, including four offenses that capture multiple forms of sexual assault: rape, sodomy, sexual assault with an object, and fondling.1

NIBRS provides the most detailed information available for sexual assault incidents that are handled by law enforcement each year. NIBRS includes demographic characteristics of sexual assault victims, offenders, and arrestees. Because NIBRS collects information on each criminal incident and each offense that occurs within an incident, NIBRS also provides crucial details about sexual assault incidents, such as whether the victim experienced multiple crime types; the presence of multiple victims and offenders; the relationship of the victim(s) to the offender(s); the time of day and type of location at which the incident occurred; whether a weapon was present during the offense and the type of weapon; the severity of injuries to the victim; and whether the incident was cleared and resulted in an arrest.

NIBRS represents a significant improvement over the FBI’s Summary Reporting System (SRS), which collected aggregate monthly counts of nine offenses and employed a hierarchy rule that required agencies to only report information on the most serious crime in the incident. On January 1, 2021, the FBI transitioned to NIBRS as the nation’s official law enforcement crime reporting standard and discontinued collection of Summary Crime Reporting program data.

Law enforcement participation in NIBRS is voluntary, and participating states and agencies are required to meet the FBI’s NIBRS certification requirements before they can submit their crime statistics in the NIBRS format. In 2015, the FBI reported that NIBRS data were provided by approximately 6,648 law enforcement agencies that collectively served more than 96 million persons. These 6,648 agencies represented approximately 36% of the more than 18,400 agencies that submitted Uniform Crime Reporting (UCR) data to the FBI in 2015.

Additional information about the status of the nation’s transition to NIBRS can be found at https://ucr.fbi.gov/nibrs-overview and at National Crime Statistics Exchange | Bureau of Justice Statistics (ojp.gov).

NIBRS Data Used for this Report

Agency participation and population coverage in the states

Though NIBRS is not yet nationally representative, a number of states submit all of their annual crime statistics to the UCR via NIBRS. In states where NIBRS is the primary crime data reporting standard, the NIBRS data provide the most reliable representation of all crimes and arrests handled by law enforcement within the state. Law enforcement records of sexual assault victimization are not necessarily representative of all sexual assaults. For information on sexual assaults not reported to the police, see Criminal Victimization, 2015 (NCJ 250180).

This report presents state level statistics on sexual assaults recorded by law enforcement. We relied primarily on the percentage of population covered when determining which states were eligible for inclusion in this report. Agency participation among the full certification states ranged from 55% (West Virginia) to almost 99% (Delaware) (Appendix Table 1). Although the submission rate for West Virginia is significantly lower than the other fully certified states (55%), most of the non-participating agencies in West Virginia cover a fraction of the state’s overall population. The West Virginia agencies that did submit NIBRS data in 2015 represent over three-fourths of the state’s resident population (78%). Vermont is a fully certified NIBRS state, but was excluded from this report due to agency non-participation. Across the 15 states selected for this report, a total of 4,543 agencies submitted NIBRS data in 2015. This report excludes crime data from 235 agencies that did not submit 12 months of data.

Appendix Table 1 displays the states selected for this report and each state’s law enforcement agency NIBRS submission rates for 2015. The data used to calculate NIBRS agency response rates and state NIBRS population coverage were downloaded from files located on the FBI’s Crime Data Explorer (CDE).2 CDE values may differ slightly from NIBRS reported values shown above. These data are provided by the FBI in downloadable files that contain the law enforcement agencies that are certified to submit NIBRS data and an indicator whether these agencies submitted a complete year of data. Agency participation rates were calculated by dividing the total number of certified agencies by the total number of agencies that submitted NIBRS data to the state, and multiplying by 100. The same files used to calculate agency participation rates also contain the size of the population served by NIBRS-submitting agencies. NIBRS population coverage was calculated by summing the total population of all eligible agencies in the state and dividing that total by the sum of the population served by NIBRS-submitting agencies, and multiplying by 100.

Incident is the unit of count used for analyses of clearance and arrest. The FBI’s UCR program defines an incident as one or more offenses committed by the same offender or group of offenders acting in concert at the same time and place. NIBRS requires law enforcement agencies to count as offenders persons who knowingly commit or assist in the commission of the offense(s) in the incident. For each incident, NIBRS captures information on up to 10 offenses, whether the incident was cleared, and whether the incident was cleared by an arrest or by exceptional means. Because NIBRS considers each offender in an incident to have committed or assisted in the commission of all offenses in an incident, an exceptional clearance or the arrest of one offender clears the entire incident, even if there were multiple offenses, victims, and offenders present.

A victimization represents one or more victim segment(s) connected to an incident. For crimes against persons, such as sexual assault, each victim in the incident will generate a separate victim segment, each of which contains information about the offense(s) committed against the victim, victim demographic characteristics, and the relationship of the victim to the offender(s). NIBRS requires that law enforcement agencies submit at least one victim segment for an incident in which a Group A offense was committed.

For more information on the data elements in the victim and incident segments of NIBRS, see the FBI NIBRS user manual.

This report is based on analyses of NIBRS victim and incident-level extract data files for 2015, which were obtained from the Inter-university Consortium for Political and Social Research (ICPSR). NIBRS Group A incident reports are a series of data elements that are stored in six separate data segments linked together by incident identifiers: the administrative, offense, property, victim, offender, and arrestee segments. The NIBRS data extract file created for this report combined data elements from these segments into a single flat file that can be analyzed using standard statistical software packages. The victim extract consists of a data file for which each victimization is a unique row with the victim’s demographic characteristics, injury information, and how the victim was related to the offender, along with data elements from other segments that are linked to each unique incident and victim record, such as the time of day in which the incident occurred, type of location, and whether the offender possessed a weapon and the weapon type, and whether an arrest was made.

Victimization rates shown in this report are calculated per 100,000 residents. Rates of sexual assault victimization for each state were calculated by dividing the state’s 2015 population by the total number of sexual assault victimizations recorded by that state’s law enforcement agencies, and then multiplying by 100,000. Rates for specific demographic groups were calculated by dividing the total number of residents belonging to that group, according to 2015 Census population estimates, dividing by the number of rapes and sexual assaults committed against that demographic group, and then multiplied by 100,000. Rates for persons of Hispanic origin were not calculated due to insufficient reporting on the Hispanic origin of victims, offenders, and arrestees. All rate calculations are based on state population estimates from the U.S. Census Bureau’s 2015 population estimates program.3

Missing data patterns vary by state and NIBRS data element. Missing values are noted under each figure and table in the report. Missing data values were highest for offender demographic characteristics and the relationship of victims to offenders since these rely on witness, victim, or law enforcement accounts, which may not be possible if an offender’s identity is unknown. Depending on the state, the rate of missing data for offender age, race, and sex ranged from 4% to 20% of sexual assault victimizations. On average, about 17% of all sexual assault victimizations were missing information pertaining to the relationship between victims and offenders. This ranged from 7% in Kentucky to 45% in Arkansas. Incidents that were not cleared by law enforcement were more likely to have unknown or invalid data values for offender demographics and victim-offender relationship. In each of the 15 states in this report, fewer than 16% of sexual assault victimizations had incomplete data for victim age, race, or sex.