Of the estimated 4,970 female victims of murder and nonnegligent manslaughter in 2021, data reported by law enforcement agencies indicate that 34% were killed by an intimate partner (figure 1). By comparison, about 6% of the 17,970 males murdered that year were victims of intimate partner homicide. 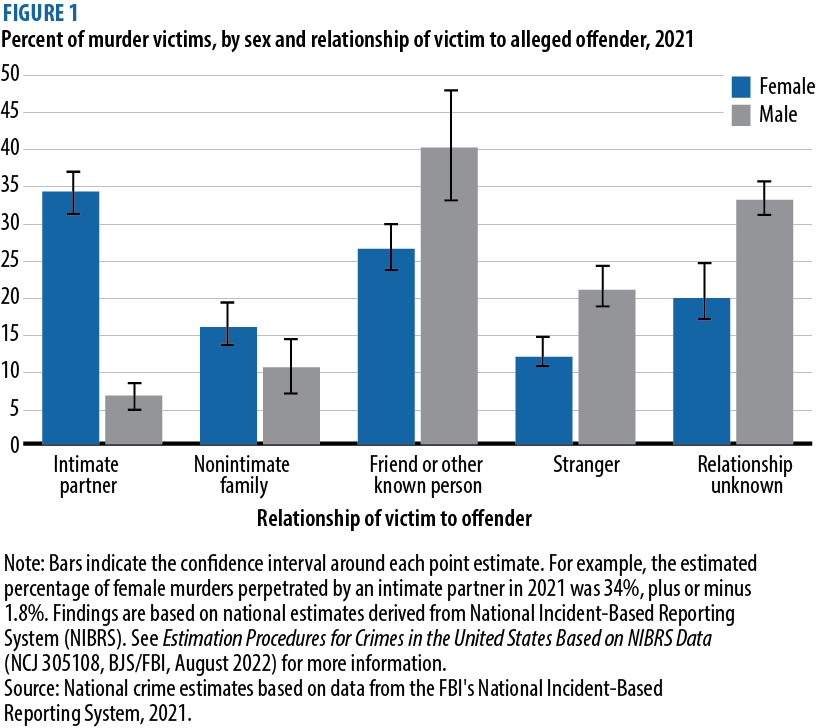 The National Incident-Based Reporting System (NIBRS) is a data collection system designed and maintained by the FBI that compiles data on all crimes recorded by participating state and local law enforcement agencies. NIBRS captures extensive information on each incident known to law enforcement. The NIBRS database collects detailed information on 52 different offenses that can occur within a crime incident and collects arrest-only information for an additional 10 offenses.1 In 2021, national estimates of crime were based on data received from about 11,790 of the 18,800 law enforcement agencies in the United States, representing approximately 65% of the U.S. population. (See BJS’s National Incident-Based Reporting System page and the FBI’s Crime Data Explorer for more information.)

Murder
Murder is composed of the two homicide categories: murder and nonnegligent manslaughter. The FBI defines murder and nonnegligent manslaughter as “The willful (nonnegligent) killing of one human being by another.”2 Attempted murders, accidental deaths, suicides, and traffic fatalities are not to be coded as murders in NIBRS. In addition, felony murder or situations where a victim dies of another cause (such as a heart attack) because of a crime being committed against them should not be classified as a murder.

The relationship category Victim Was Offender is not included in this report. Less than 2% of murders and nonnegligent manslaughters in 2021 were estimated to include this type of relationship.

Calculating national estimates of crime based on NIBRS

Beginning with the 2021 data year, national estimates of crime known to law enforcement were based solely on NIBRS data. To calculate national estimates, BJS and the FBI partnered with RTI International to establish a new set of statistical procedures that would incorporate the NIBRS data structure and account for agencies that did not report data to the system. In October 2022, the FBI published the first set of national estimates derived from the new methodology; the data tables are available. For information about the development of the estimation procedures, including links to technical reports documenting the process, see the BJS NIBRS Estimation Project.