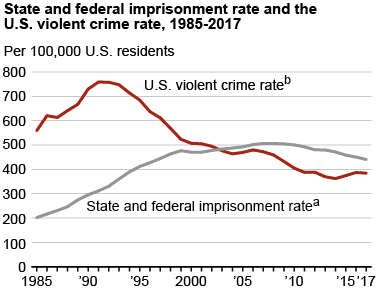 Reports: Prisoners in 2017 and Crime in the United States

aThe imprisonment rate is based on the number of sentenced prisoners (i.e., more than one year) under state or federal jurisdiction on December 31 of each year and includes prisoners held in publicly and privately operated facilities. Resident population estimates are from the U.S. Census Bureau for January 1 of the following year.

Source: Bureau of Justice Statistics, Prisoners in 2017 (NCJ 252156, BJS, April 2019), and imprisonment rate of sentenced prisoners under the jurisdiction of state or federal correctional authorities per 100,000 U.S. residents, December 31, 1978-2016, which was enumerated using the Corrections Statistical Analysis Tool at https://www.bjs.gov/index.cfm?ty=nps; and BJS analysis of data from the FBI’s Crime in the United States, table 1 for 2018 and 2000 (https://www.fbi.gov/services/cjis/ucr/publications, downloaded on 2/13/2020).