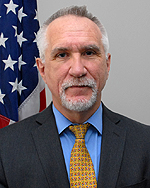 On February 25, 2015, William J. Sabol, Ph.D., was introduced as the Director of the Bureau of Justice Statistics (BJS) by Assistant Attorney General Karol V. Mason at an Office of Justice Programs Town Hall meeting. Prior to his appointment as director—effective January 23, 2015—Bill was the Acting Director of BJS (appointed January 2013) and the Principal Deputy Director for Statistical Programs. Bill has more than 25 years of experience in research and statistics on corrections, sentencing, and justice issues in different settings, including the Government Accountability Office, where he was an Assistant Director; Case Western Reserve University, where he was Associate Director of the Center on Urban Poverty and Social Change; the Urban Institute, where as a Senior Research Associate he directed research on sentencing and social control in communities; and the University of Maryland, where he was an Assistant Professor in Afro-American Studies and Criminology. Bill’s research efforts over the years have focused primarily on criminal justice policy issues, notably on sentencing policy, the effects of incarceration on communities, and statistical issues and methods. Prior to earning his doctorate from the Graduate School of Public and International Affairs at the University of Pittsburgh, he was a Fulbright Scholar at the Institute of Criminology at Cambridge University.